Douglas Bourn.
The impact of Globalisation on societies, economies and political systems has never been greater than it is today. Brexit, the rise of xenophobia and extreme forms of nationalism in Europe and the Trump phenomenon are in part due to the influence of global forces and people’s sense of powerlessness.
Globalisation has enabled instant access to knowledge for millions of people around the world but has also resulted in the rise of ‘fake news’. Therefore, there has never been a greater need for educational institutions around the world to address these global influences.
The IOE’s Development Education Research Centre has been at the heart of responding to this need, with its research, initiatives and publications.
One of the most important of these has been the International Journal of Development Education and Global Learning which this year celebrates its 10th END_OF_DOCUMENT_TOKEN_TO_BE_REPLACED

Brexit: German universities among those poised to benefit if researchers and funding shift 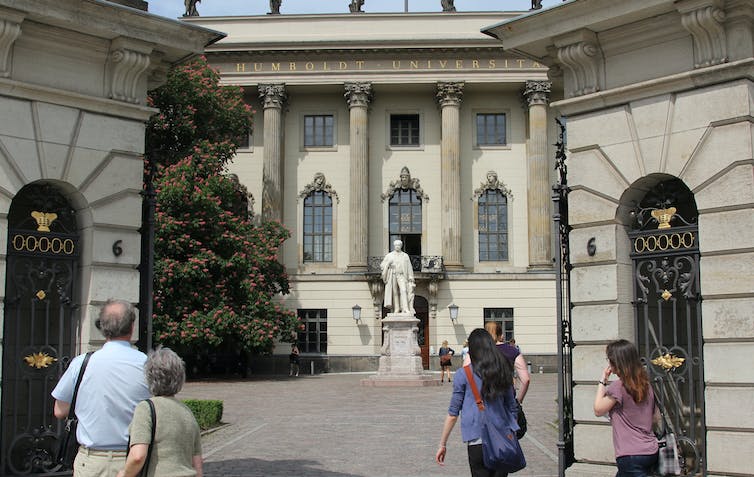 Humboldt University in Berlin. German universities may emerge as ‘winners’ from Brexit. Tilemahos Efthimiadis, CC BY
Aline Courtois
The UK is currently the second-largest recipient of competitive research funding from the EU: 6% of students and 17% of staff in UK universities are from other EU countries. Nearly half of academic papers produced by the UK are written in collaboration with at least one international partner – and among the top 20 countries UK academics cooperate the most with, 13 are in the EU.
While collaboration is important, countries also compete with each other for funding and students. Our new research has found that academics and institutions across Europe, and particularly in Germany, could make significant gains as Brexit shakes END_OF_DOCUMENT_TOKEN_TO_BE_REPLACED

Avril Keating.
In the immediate aftermath of the EU referendum, much was made of how devastated young people were by the result. A survey by Lord Ashcroft suggested that over 70% of young people aged 18-24 voted Remain, while almost 60% of over 55s voted to Leave.
In my ongoing research, I’ve found that this view is too simplistic: in practice, young people’s reactions and views are much more diverse and tricky to categorise.
Between March and September 2017, my colleagues and I talked to young people around England about their attitudes towards Brexit and aspirations after the referendum. Our fieldwork took us to London, the south coast, the west of England, and greater Manchester. Along the way, we spoke with END_OF_DOCUMENT_TOKEN_TO_BE_REPLACED

Brexit: what is at stake for UK universities?

Why will Brexit affect the UK higher education landscape?

Brexit will affect UK higher education in a major and pervasive way because over the last half century EU institutions have contributed to shaping an open European area for higher learning and research inwhich the UK has become deeply involved. This has translated itself over time into EU law. Articles 165 and 166 of the Treaty on the END_OF_DOCUMENT_TOKEN_TO_BE_REPLACED

Understanding youth turnout in GenElec2017: some comments, cautions and caveats

Youth turnout in the British general election has once again been the focus of much media attention and social media comment, with some calling this election a “youthquake”. In this blog, I provide some contextual information for these stories, and some words of caution for interpreting the data that is currently available.
1. It is widely being claimed that 72% of young people turned out to vote in the General Election. This is an early estimate, and likely to be contradicted. After the EU referendum in 2016, the headlines focused on initial claims that only 36% of young people aged 18-24 voted, however subsequent polls estimated that turnout among this age group was closer to 60%.
2. The best sources to look for are the How Britain Voted series (published by Ipsos-MORI, usually a few weeks after the election) and the British Election Study (which will release its figures in the Autumn).
3. Even these two sources are likely to contradict each other. In 2015, Ipsos-MORI data suggested that turnout among the 18-24s was 43%, while
END_OF_DOCUMENT_TOKEN_TO_BE_REPLACED

Comments Off on Understanding youth turnout in GenElec2017: some comments, cautions and caveats

Miri Yemini.
It has now been six months since the referendum results revealed British voters’ decision to withdraw from the European Union, and schools in London are beginning to adjust to this new phase of history. As schools are now required to promote ‘Fundamental British Values’ I was interested in understanding how teachers in highly diverse schools were now tackling the global and local aspects of citizenship education.
It turns out that Brexit is dominating their thoughts: teachers in London’s most diverse schools see Brexit as a threat to the schools’ identity and nature. END_OF_DOCUMENT_TOKEN_TO_BE_REPLACED

HE in Brexit Britain: from international leader to also-ran?

Paul Temple.
Jamie Martin, a Leave campaigner and former special adviser to Michael Gove has written a piece in Times Higher Education on how British universities could achieve “education leadership in a post-Brexit world”. Martin begins his article by giving the impression that he sees the Battle of Waterloo in terms of plucky little England standing up to a gang of foreigners. In fact, the Duke of Wellington led a proto-EU multinational army group that would have certain sections of the Press frothing with rage if it was even suggested today. In 1815, it was Napoleon who stood alone against a combined Europe.
The rest of Martin’s piece is a good example of what I suppose we’ll have to get used to from the Brexiters. From being told, pre-referendum, that there were lots of golden opportunities there for the taking once we were freed from the EU’s iron grip (though specific examples were hard to come by), we’re now told that, fingers crossed, there may be ways round the (accurately predicted) difficulties that Brexit presents. It’s as if the UK had just drifted in from mid-Atlantic to find all these interesting things going END_OF_DOCUMENT_TOKEN_TO_BE_REPLACED

Universities have a crucial post-Brexit role in working across borders

At first, after the June referendum, it was unclear what ‘Brexit’ meant, but the post-Brexit landscape is now emerging. Theresa May will table the complex bill to leave the EU in the House of Commons in March 2017, but the two most important decisions have already been made. First, the Government will give priority to ending free people movement from Europe. Second, as confirmed by Home Secretary Amber Rudd this week, total net migration will fall. The referendum was decided because people opposed migration and it seems that for the Prime Minister both measures have become politically essential.

These decisions are truly momentous as they trigger both a harder Brexit and a tough medium term prospect for higher education and research. In the universities, where relations with Europe have been unambiguously positive and productive, the END_OF_DOCUMENT_TOKEN_TO_BE_REPLACED

There's more that holds us together than divides us

As a stoic Mancunian, I stagger through the sodden winter streets of Nedlands, Western Australia. My flimsy umbrella no match for the deluge, I take shelter in Morgan Marks clothing store. There is a sale on. Conversations unfold.
What brings you here? Where are you from? And the clincher…..What is happening in the UK?  I have been asked this question many times since leaving Heathrow Airport on July 4 for Hong Kong, en route to Australia: by residents at the peaceful Jen Hotel; by a Law applicant to UCL, at the Transit Interchange at Admiralty; and now by this group of interested  Australian women,  keen to share stories about aberrant  politicians.
Since the early hours of June 24, a post Referendum gloom has shrouded me. I have been in mourning for the idiosyncratic Britain I thought I knew: the ‘cultural cacophony’ of my second city, London; the roars that filled the Olympic Stadium in 2012, for British–Somalian Mo Farah. Disaffection, disenfranchisement and disengagement seemed to have prevailed.
Yet on this damp Australian morning I reply, ‘There’s more that holds us together than END_OF_DOCUMENT_TOKEN_TO_BE_REPLACED

Linguistic xenophobia and why it should be resisted

by the TLANG team.
Like many around the country, the Translating and Translanguaging team have been shocked by the upsurge of xenophobia and racist hate crime which the police believe have been triggered by the BREXIT vote. The outcome of the vote seems to have been interpreted by some as permission to hate, or rather to express that hatred through abuse and violence. As part of the TLANG Project we are working with the East European Advice Centre, housed in the Polish Social and Cultural Association (POSK) building in Hammersmith, London. As widely reported in the media, POSK came under racist attack with graffiti smeared over its front door the day after the EU Referendum.
Aspects of the BREXIT campaign, designed to raise fear and anxiety over migration, have encouraged this response, as has the campaign of disinformation on migration conducted by some sectors of the press. As concerned citizens we join with others in deploring this END_OF_DOCUMENT_TOKEN_TO_BE_REPLACED

Comments Off on Linguistic xenophobia and why it should be resisted