I was interested to discover, that the famous merchant banker, Sir Francis Baring (1740-1810), was deaf, or ‘partly deaf’.

At Lee, Kent, aged 74, Sir Francis Baring, bart. one of the Directors of the East India Company, and formerly M.P. for Taunton. He was of a Devonshire family; came to London early in life, and studied mercantile affairs, if we mistake not, in the house of Boehm.  His talents were of a very superior cast, and highly improved by reading. Few men understood the real interests of trade better ; and it may surely be added, few men ever arrived at the highest rank and honour of commercial life with more unsullied integrity. At his death, he was unquestionably the first merchant in Europe; first in knowledge and talents, and first in character and opulence.  His name was known and respected in every commercial quarter of the globe; and by the East India Company, and other public trading bodies, he was consulted as a man of consummate knowledge and inflexible honour.  Throughout his long and respectable life, he acted on those steady principles which seldom fail to raise men to opulence and credit, although they may not always enable them to shine with such superior lustre.  One obstruction Sir Francis Baring had to contend with from his earliest days—an incurable deafness. By the usual helps, however, he contrived that this should very little impede this communications; and both in Parliament, and as chairman of the East India Company, his opinion was so highly valued that every pains was taken to prevent the subject in debate from suffering by his infirmity.  His private, as well as public life, if faithfully delineated would form a most instructive lesson to the mercantile world; and a lesson particularly necessary at a time when so many seem to forget or despise the genuine attributes of an English merchant, and aspire at sudden and unsubstantial wealth and credit, by the paltry speculations of mere fraud and low cunning.  On the contrary, the soundest principles and truest policy laid the foundation of Sir Francis Baring’s fortune and character, and guided him in all his transactions. In future annals, he will rank with the illustrious names of Gresham, Firmin, and Barnard, men who have formed the English character, and to whom English commerce is indebted for its superiority.  (my emphasis) (Obituary, in the Gentleman’s Magazine, LXXX, 1810, II, p 293)

The great portraitist, Thomas Lawrence, cleverly represented Baring’s deafness in his group painting of Baring, his brother, and Francis Wall, from 1806/7, where the three men are in discussion and Francis has his left hand up to the side of his face, as if to cup his ear.  In his biography of Lawrence, Sir Thomas Lawrence: The Artist (2005), Michael Levey says, “He clearly felt no inhibition about being so depicted, and both he and Lawrence may have recalled that one of Reynold’s self portraits similarly showed him as deaf.” The following page is from the Life and Correspondence of Sir Thomas Lawrence by D.E. Williams – 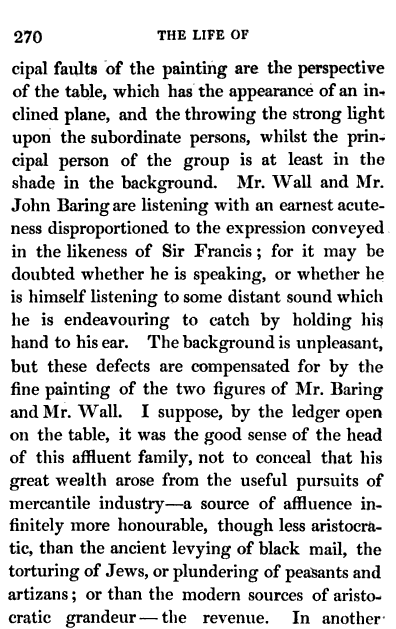 In his memoirs, the business man Vincent Nolte, wrote,

He had become somewhat feeble, and very deaf, when I first got personally acquainted with him. (Fifty Years in Both Hemispheres, p.158)

I have struggled to find additional sources as to his deafness, most seemingly going back to this obituary or another version of it, as newspapers often reprinted articles from other papers in full with no credit.  Unless someone can point to a contemporary source in his lifetime, such as a letter for example, we will have no idea of the extent of his deafness or its cause.  If you know of any additional sources for his deafness, please add a comment  below.  As with so many areas connected with things I come across in writing these pages, it is deserving of far more research than I can give it.

Thanks to the Baring Archive for this reference, from Anecdotal Reminiscences of Distinguished Literary and Political Characters by Leigh Cliffe –

Sir FRANCIS BARING was a person of vast importance in the commercial world, and of some influence in the House of Commons of which he was an opposition member; he was the particular friend of Lords Lansdowne and Ashburton, Colonel Barry, Jekyll and many other names well known to the world, and was, though troubled with an inveterate deafness, which prevented his hearing even common conversation without the assistance of a pair of ear trumpets, constant in his attendance at St Stephens, whenever any question of interest was before the house.

I did come across this anecdote, in The New Monthly Belle Assemblée: A Magazine of Literature and Fashion, Volumes 10-11, p.308 –

The late Sir Francis Baring, father to the present Lord Ashburton, was very deaf, and on one occasion, the bells being out of order at his residence, a man was sent to arrange them properly, and he, having completed his task, requested Lady Baring to try them.  Like most fine ladies who dislike to be troubled about trifling concerns, she asked him somewhat angrily why he could not try them himself, when he pleaded excessive deafness as an excuse.

There is a recent book, Disability and Colonialism: (Dis)encounters and Anxious Intersectionalities (2015), edited by Karen Soldatic and Shaun Grech, that may be of interest.  It has a chapter by Esme Cleall on ‘Orientalising deafness: race and disability in imperial Britain,’ that mentions Baring, who made a considerable amount of money in the slave trade, and via the East India Company.

It may interest you to know that Francis Baring is a 5 x greats grandfather of Prince William, through a daughter of his grandson, Edward Baring, 1st Baron Revelstoke.