US Election Awash in Virtual Realities

A decade ago, I wrote a book describing the ‘virtual politics’ of Eastern Europe. Many common patterns could be detected in all the post-communists states, but the paradigm was set by Russia, where the Kremlin had managed to create a world of puppets and fakes. Politics was not institutional, but theatrical, and its key principal was narrative control. The Kremlin determines a script, in Russian the dramaturgiia , that all the key players must follow, and whose carefully-staged ‘achievements’ are the basis of Putin’s super-ratings. In Russia, so-called ‘political technology’ has developed ever-broader forms since 2005. Peter Pomerantsev has even argued that the system requires ever-higher doses of drama; both the domestic Russian system and Russia’s tendency towards conflict with its neighbours is based on narrative escalation dominance, not on the conventional threat of military escalation.

The West has different problems. The key parts of the political system are not fake; although there are some practices that Russians might recognise, like astroturfing  (running fake grassroots campaigns, and disguising the real sponsors of political messaging). Russians would also recognise the increasing abuse in US elections of what they would call ‘administrative resources’ – the resurrection of practices that were more common before the landmark Supreme Court judgements of the 1960s, particularly the abuse of redistricting powers by state legislatures and efforts to reduce the registration of minority voters.

But Russia’s would-be democracy has always been infected by ‘political technology’. In the West, the quality of democracy is under threat from technological and social change. The traditional institutions and formats of politics of the modern era, that predominated until roughly the 1980s, like political parties, broadsheet press and national TV news, are being disrupted by post-modern technologies. Moreover, new paradigms of social identity and new forms of social protest are replacing the agit-prop and door-knocking of party or trade union members with passive-aggressive activism or slacktivism. Virtuality, in the Western sense, is not an entirely fake democratic process, but the cumulative disruptive effect of technological and social changes that are now the tail wagging the democratic dog.

Nevertheless, the extraordinary 2016 US election has taken things a step further. But the election process has become more ‘virtual’ in several different ways. Many commentators have described the eruption of Donald Trump into the election as the victory of virtuality over reality, or of the takeover of reality by reality TV. According to Matt Taibi in Rolling Stone, for example, ‘the presidential election campaign is really just a badly acted, billion-dollar TV show whose production costs ludicrously include the political disenfranchisement of its audience. Trump is making a mockery of the show’, but his critics have ‘all got it backward. The presidency is serious. The presidential electoral process, however, is a sick joke, in which everyone loses except the people behind the rope line’. Politicians have been gradually turning into actors for some time, so why not a real ‘celebrity’ pretending to be a politician?

Others have blamed the media themselves for being suckered. According to Neal Gabler in Salon, ‘We all enabled Donald Trump: Our deeply unserious media and reality-TV culture made this horror inevitable’. ‘What the media did is fulfill what almost seemed to be a longtime mission: to create the first “pseudo-campaign” with the first “pseudo-candidate.” And now they are having buyer’s remorse’. ‘Donald Trump did not create this situation. He is its heir, and simply the most gifted practitioner of the pseudo-campaign, though Cruz and Rubio, equally pseudo, try hard to purvey the same lack of substance.’

Pseudo-campaigns are dominated by pseudo-people; ‘celebrities aren’t expected to be substantive. In any case, while celebrity may not be much of a recommendation for the presidency, it is a hell of a recommendation for a presidential aspirant performing before a media that is far more interested in creating a reality show than presenting a process for selecting a leader. Trump is the Kardashian of politics’.

Trump’s methods have matched his personality, in style if not in size. Trump has leveraged this disruption of the Republican Party with his twitter feed. He also knows that traditional media feed off controversy. He had gained an estimated $1.9 billion in free media coverage by March 2016, simply by saying whatever makes unmissable TV. One media mogul, the boss of CBS Les Moonves endorsed with relish how he was being led by the nose: “It may not be good for America, but it is damn good for CBS.” “The money’s rolling in and this is fun.”

Hillary Clinton is not an unnatural force of nature like Trump. She does not have the force of personality to disrupt the campaign. But she brings a different kind of virtuality to politics. Walter Russell Mead has written that Clinton ‘is a machine politician, but the machine behind her is a new kind of American political machine: a postmodern one’, a successor to the old city and or ethnic ‘machine politics’ built in the nineteenth century, which has no fixed tradition or territory but is still based on favour and ‘honest graft’. ‘The Clinton political machine, like all machines, ultimately runs on money’. But ‘today, every politician is a freelance operator, accumulating bundlers and backers’. And in a suitably post-modern twist, globalisation is also key: ’The Clintons have built a machine that facilitates the integration of global power into American politics’.

The idea of the permanent campaign was coined back in 1980. But Hillary Clinton has taken it one step further. In her version of the permanent campaign, politics is not about politics any more. It is about defying the laws of gravity. Lack of office does not matter if the promise of office is there. Lack of policy delivery does not matter if the promise of policy delivery is there. All that matters is keeping the circle chasing its tail, as money and influence reinforce one another.

Bernie Sanders is of course the Chomsky candidate. To Bernie and his supporters, ‘virtuality’ belongs to the old politics, the ‘bought elections’ and beltway politics that Sanders tilts against.  In this respect, Trump is more like Sanders, whilst remaining the anti-Hillary. Trump is supposedly liberated by his own (unquantified) wealth from conventional politics. With some justification – Trump had only spent $10 million on campaign ads compare to Jeb Bush’s $82 million by the end of February 2016, breaking the old rule that the highest ad spend always triumphs in the end (Sanders had just out-spent Clinton by $28.4 million to $27.9 million). 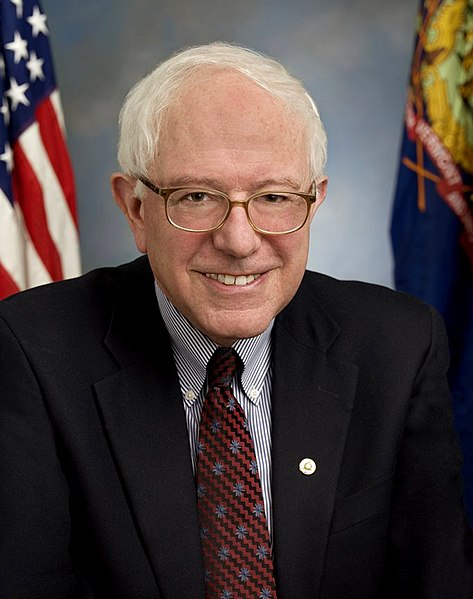 Sanders supporters’ blogs and posts typically claim that ‘Bernie Sanders corrects the false narrative the mainstream media promote’. Sanders’ analysis is straight out of 1968, via Citizens United: he is bravely taking on a hegemonic ‘media narrative’ backed by the American oligarchy’s new iron triangle of big business, lobbyists and campaign finance. Hillary Clinton is supposedly just as much a part of this world of ‘manufactured consent’ as any other mainstream candidate.

Noam Chomsky of course agrees, but initially argued that Sanders was too weak to take on this nexus on his own. Then Chomsky gave him a half-hearted endorsement in January. Sanders claims to be ‘more real’ than any other candidate, but his anti-system purity is predicated on the easy promises of a politician who ultimately does not actually expect to be elected.

The three main personalities of the campaign are mirror images of one another. For Trump and Sanders at least, their rise may be in part a reaction to seven years of Obama’s professorial pragmatism. The 2016 campaign is also of course a long-fuse reaction the Great Crash in 2007-08. But the campaign is also a key marker in long-term trends that will affect every democracy in the West. In their different ways, and despite their different ages, Donald, Hillary and Bernie are all shaped by the post-modern media world they inhabit.

My latest book Ukraine Crisis: What it Means for the West is available as an e-book and as a paperback original at £12.99.