In the fourth of our blogs to mark the launch of the UCL SSEES FRINGE centre, Tim Beasley-Murray considers the concept of neutrality.

The story of Icarus, his father Daedalus, and their fateful escape from the labyrinth that Daedalus himself had designed for the cruel King Minos is well-known. Father and son fashion wings from feathers and wax and take flight, leaving Crete behind and the sea far below. Thrilled with the sensation of flight, Icarus soars ever higher. Deaf to the warning cries of his father below that he is flying too high, he climbs closer and closer to the sun. The heat of its rays melts the wax that holds his wings together and Icarus, who had wished to rise to the height of the Gods, falls, only too mortal, to his death in the sea below. 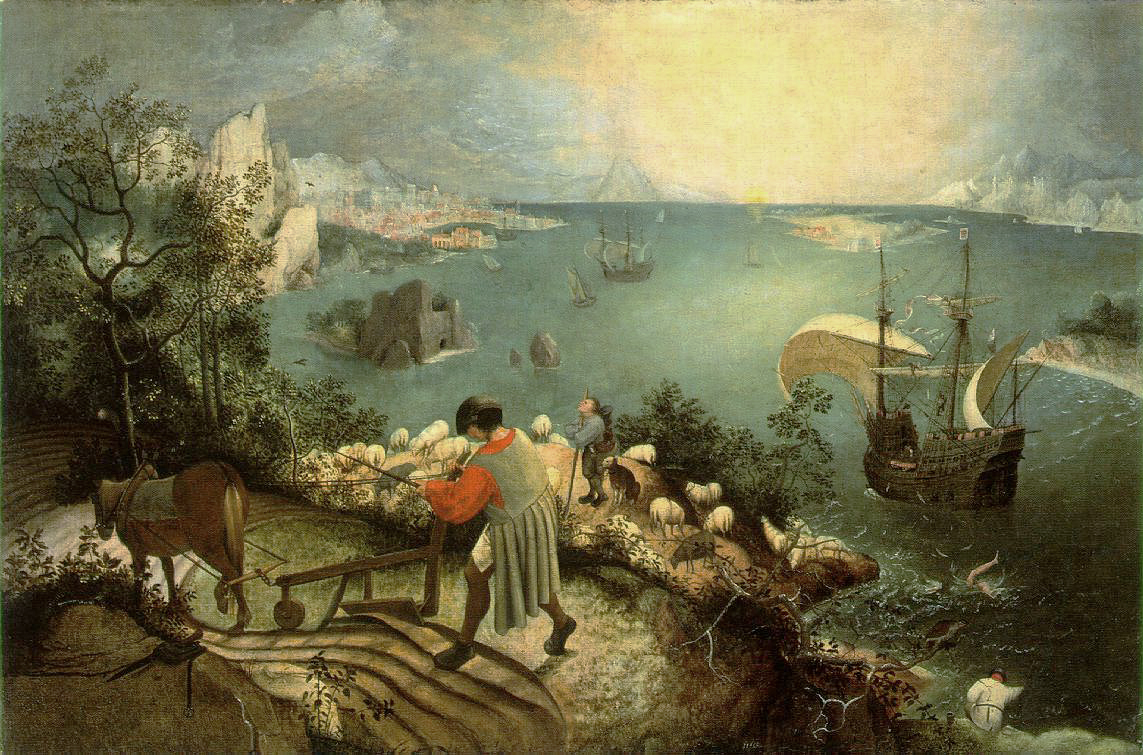 This story, like all myths, is structured by a series of complementary oppositions that give it meaning: father versus son; the wisdom of age versus the foolishness of youth; the Gods on high versus mortals below; the warmth of the sun versus the icy waters of the sea; hubris versus nemesis; life versus death. ‘Landscape with the Fall of Icarus’, painted in the 1560s and traditionally attributed to Pieter Brueghel the Elder, tells us this story. But this story is not at the centre of the painting. Icarus’s legs are all that we see of him, tucked away in the lower right hand corner of the painting: small, insignificant, almost comic, waving pathetically as they disappear into the sea. Compositionally more important are the merchant ship that sails on unperturbed, going about its usual business, the shepherd unconcernedly tending his flock, and, above all, the ploughman whose large figure occupies the foreground of the piece. Nothing could be more striking than this measuredly unstriking, undramatic and almost offhand presentation of Icarus’ dramatic death, a presentation that has captured and puzzled viewers ever since, not least W.H. Auden who makes it the subject of his poem, ‘Musée des beaux arts’. For the figure of the ploughman makes a curious contrast with Icarus, the ostensible subject of the painting. The ploughman, whose face we do not see and who does not notice the distant tragedy that has just unfolded, continues to plough – taciturn, indifferent and opaque, heavy with the silent corporeality of everyday existence. He embodies that aspect of the world that is unmythical and unmemorable, normal and neutral, that does not tell a story, that is not structured by oppositions, and that hence resists interpretation.

Here, then, in the figure of ploughman, is a figure of the neutral that FRINGE wishes, like Brueghel, to put at the centre of its vision, turning away from the drama of figures like Icarus to figures of resistant taciturnity. For what is the neutral? Inspired by Roland Barthes and his lecture course on the neutral at the Collège de France, we define as neutral those phenomena that refuse taxonomy, that appear as third terms that resist, disrupt, outwit or outplay (Barthes’s term is déjouer) the binaries with which we usually make sense of the world: in grammatical or gender terms, neither masculine nor feminine, but neuter, trans-, or androgyne; in political and ethical terms, neither for nor against, but both complicit and resistant; neither right nor left, right nor wrong, but disruptive and ambivalent; in terms of area, neither East nor West, but co-imbricated and overlapping; in sociological terms, neither ordered nor chaotic, neither formal nor informal, neither structured nor fluid; neither centre nor periphery, but neutrally the FRINGE Centre.