Myths in the Museum: The Unicorn Horn of UCL

It’s there, just across the main UCL campus on Gower Street. A mystical power of unknown proportions coveted by monarchs and conquerors of golden ages past. Quiet and unassuming, mounted on a museum cabinet crammed with jars of preserved worms and spiders bobbing about in 70% ethanol for eternity, this long, white, spiraled object that looks suspiciously like a wizard’s wand or sorcerer’s staff, sought after by the most powerful dynasties to walk the earth…

No, it’s not a unicorn horn. It’s the Grant Museum of Zoology’s narwhal tusk.

Don’t feel bad for mistaking it for a unicorn horn, though. For centuries the Vikings harvested these tusks—which can be up to 10 feet long—from the ocean creatures off the arctic coast of Greenland and used, gifted, and traded them. They were brought to northern Europe via the major trade routes across the Atlantic linking Greenland and Iceland with the British Isles, Scandinavia, and ultimately the Baltic. Since the unicorn symbolized immortality, power, and protection against poison, narwhal tusks were rare and highly sought after to adorn royal objects in Europe and into Asia. They also served as magico-medical material in the cabinets of wealthy physics and apothecaries (whether their unicorn horn powder was ‘authentic’ is another story).

Unicorns feature heavily in myths and tales as a symbol of both power and pure magic. (Screenshot from Disney/Walden’s Chronicles of Narnia: Lion, the Witch, and the Wardrobe; 2005) La Dame à la licorne: À mon seul désir. The famous 16th-century Flemish tapestry, one of six in a series, depicting a noblewoman with her lion and unicorn. It now hangs in Musée de Cluny, Paris.

Perhaps the most famous example of European monarchies’ obsession with owning unicorn horn bling is the Danish throne in Rosenborg Castle. It was commissioned in 1662 to symbolize the ‘absolute monarch’, and was inspired by the throne of Solomon—so naturally its surface was almost entirely covered with precious ‘unicorn horn’. Narwhal tusks were procured by Danish traders, since during this time the Danish monarchs claimed Iceland and the Faroe Islands. So what are these ‘unicorns of the sea’? Narwhals, Monodon monoceros (Greek for ‘one-tooth’ ‘one-horn’) are mid-sized porpoises native to the arctic. Narwhals and beluga whales are the only members of the family Monodontidae, and our knowledge of their daily habits remains elusive. Though they usually don’t share a habitat, just this week a juvenile narwhal male was seen by Quebec researchers playing with a beluga pod over 1000 km south of its usual Arctic range, apparently adopted by its cousins!

Now for the million-dollar question: what is the tusk, besides a magnet for power-crazy monarchs and mystical medicine hunters? The ‘horn’ or ‘tusk’ of a narwhal is actually… a tooth. Unlike many other debunked myths from the Middle Ages, the potency of this unicorn horn’s still relatively shrouded in mystery. For years scientists have debated and theorized about its actual use, from weapons to ‘joust’ for dominance with other males as part of mating rituals, to sensory tools to detect water temperature, pressure and salinity. It wasn’t until last year that drone footage captured footage of narwhals using their tusks to hunt codfish, suggesting the complicated nerve systems within these tusks may have stunning capabilities.

[above and below] Narwhals, narwhals, swimming in the ocean. (Credit: World Wildlife Fund) 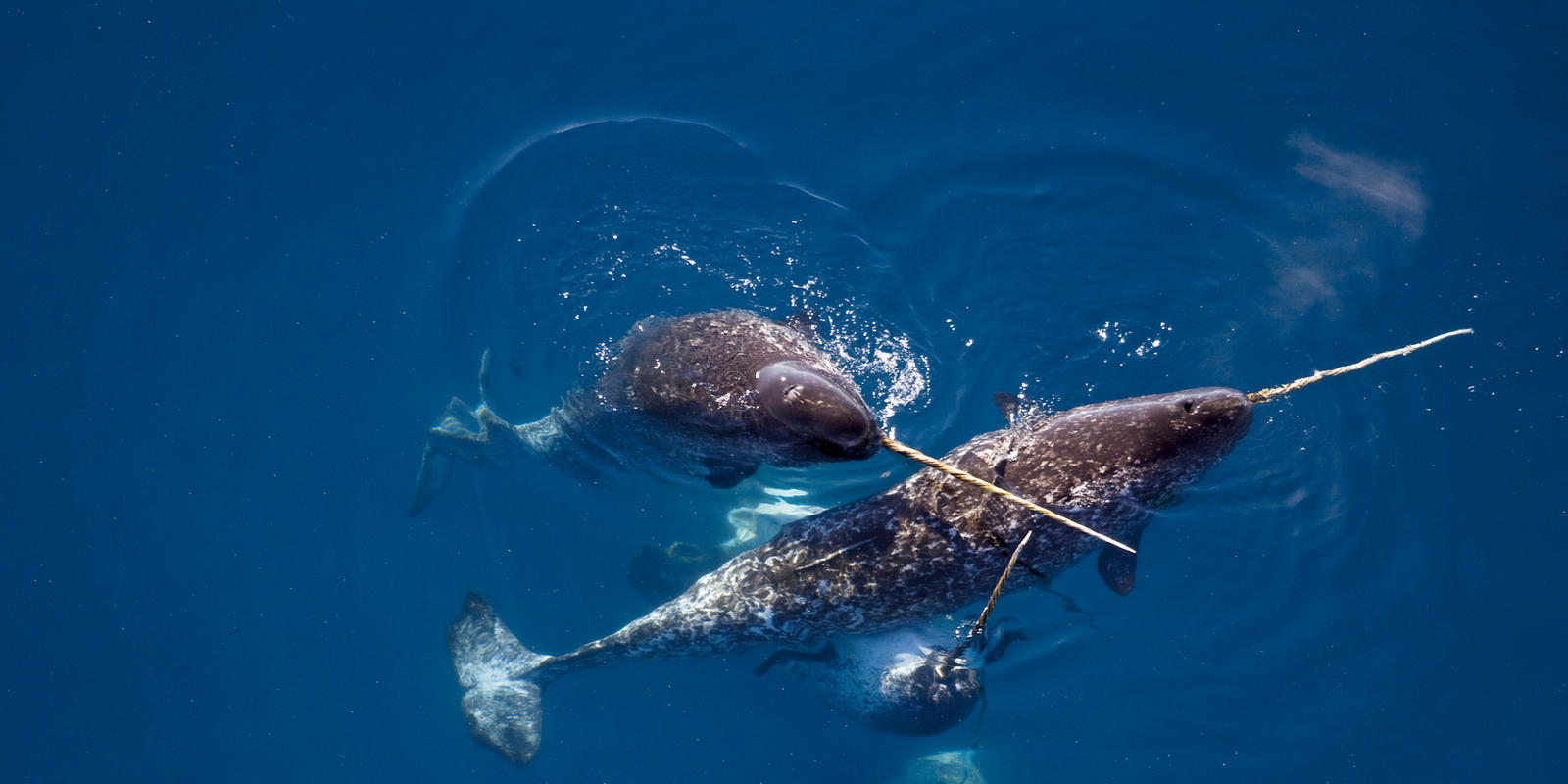 So do unicorns exist? We’d have to say no. But until technology catches up to human curiosity and scientific research, these sea unicorns remain as elusive as the myth that surrounds their magical tusks.

One Response to “Myths in the Museum: The Unicorn Horn of UCL”