Eight-year-old Dean is a white, working-class Londoner who doesn’t usually engage much during science lessons. As he tells his teacher, Ms Lessing, he’s going to be a footballer when he’s older, so he doesn’t think he needs to learn science…

The question of how to engage and reach more children through science is one that concerns many primary teachers. In this article, we share news from a new collaborative project between teachers and researchers called Primary Science Capital: A whole-school approach, that is identifying some encouraging ways forward.

What does a social justice approach to science teaching look like in practice in primary schools? To answer this question, researchers at UCL and KCL (with the support of Primary Science Teaching Trust and The Ogden Trust) are collaborating with ten teachers from primary schools across England to co-develop an inclusive teaching approach that will better engage diverse learners with science. Our team, led by Professor Louise Archer, has previously worked over four years with secondary teachers to co-develop the ‘science capital teaching approach’ which forefronts issues of social justice within the teaching and learning of science. We are excited to now be able to work with colleagues to extend and develop the approach within primary schools – not least as research tells us that primary is a crucial time during which children’s ideas about science, and whether it is considered ‘for me’, or not, are formed.

What is a ‘science capital’ approach? 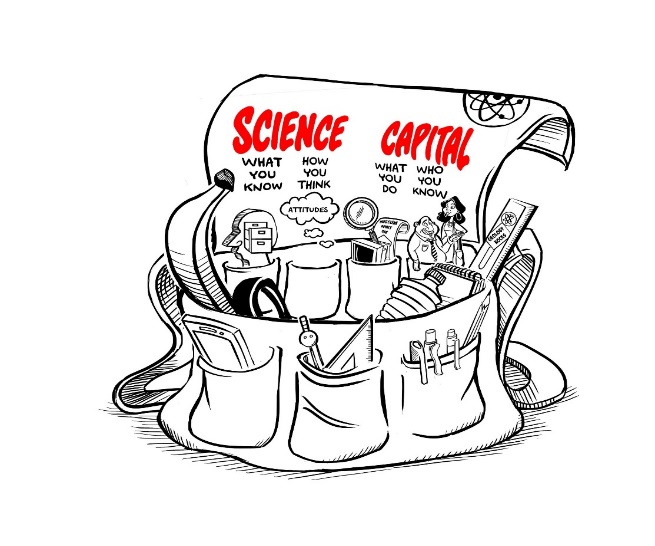 Some children have bags that are full of science-rich experiences and resources that they have gained from home (these children can be thought of as having ‘high’ science capital). Other children may have ‘lower’ levels of science capital, although they will still have knowledge and experiences that can be related to science, even if these are not always recognized as such.

At its heart, a science capital approach seeks to build the relationship between children and science by broadening the ways in which science is represented, by valuing what all children bring with them and by connecting science with children’s identities, experiences and what matters to them and their communities. The approach asks teachers to adopt a social justice mindset – that is, thinking critically about power relations that can exist in classrooms and inequalities that may go unnoticed. The approach works with any curriculum, supporting teachers to reflect on every aspect of their teaching, and then ‘tweak’ their practice in line with the core principles and ‘pillars’ of the approach. Find out more in this animation. 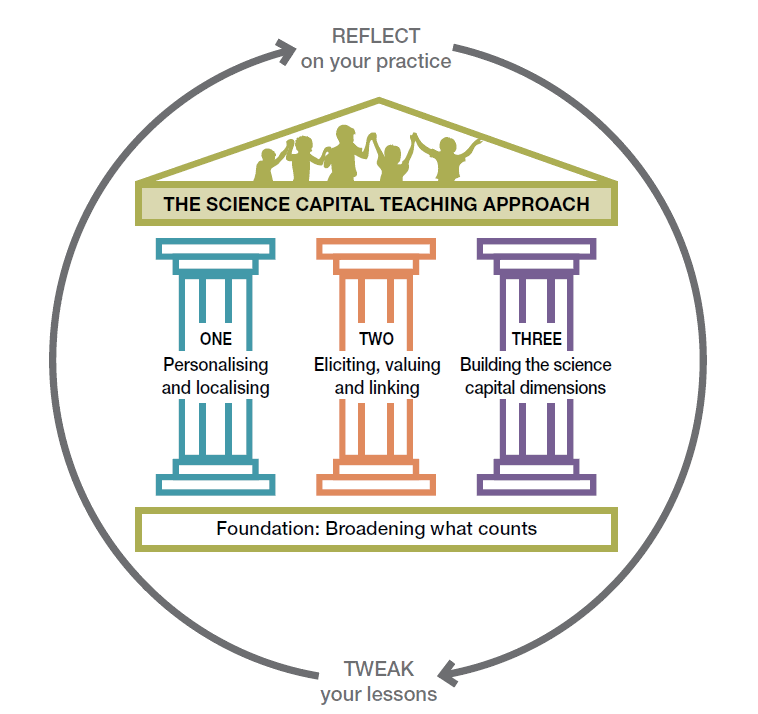 What do teachers say about the approach?

We asked our ten teachers, what first attracted them to the project? Teachers primarily felt that the science capital approach would help provide greater science-related opportunities to their students. A Year 4 teacher in a Worcester school said, “I got involved because I want our children to have choices and opportunities”. Another teacher explained: “I want to improve the life chances of young people in my school – to show them their place in science, that they are valued, and that science is for them!”

Teachers felt that this initiative offered something different from other science education programmes: “This is not a new initiative, fad or fashion; this is an approach that appreciates who we teach and where they come from and making that count for something” (Year 3 teacher in a London school). Ms. Davis, teaching at a school in Wellingborough, particularly appreciated that the approach does not entail upheaval of her current teaching plans but a more subtle form of change. She says “You do not have to re-write your science lessons – it just takes small tweaks”, making it an approach which builds on teachers’ expertise instead of discounting it.

In the few months (since October 2019) of attempting and experimenting with the approach, teachers are already finding success. In particular, teachers are valuing the opportunity to critically test and thereafter reflect on the impact of small changes. They have also enjoyed finding out more about the children’s lives and have noted that efforts are leading to increased engagement in science lessons. Ms Lessing explained: “Personalising lessons has been thought-provoking. It has engaged children from the start of the lesson and has taught me more about the children. It has made science more of a personal connection for the children”. Similarly, Ms Davis said: “Personalising science lessons has meant that I have discovered more about their interests and lives”. Ms Hawker even felt that parents are now getting more involved in school science: “Making learning personal to pupils’ own experiences and home life has improved pupils’ and parents’ involvement in science”.

And what about Dean, the aspiring footballer? Ms Lessing has been applying the approach throughout her science lessons and our lesson observations have recorded the buzz and engagement of all the children in her class. On our most recent observation, we saw Dean not only engaging enthusiastically with the activities but also putting up his hand first to answer teacher questions and excitedly sharing his experiences.

We are still in the early stages of our project journey, but we all feel that these initial steps are rewarding and encouraging.

This blog was originally published as part of Wellcome foundation’s Explorify blog series.

Changing pupils’ self-image of themselves as science learners remains a hard nut to crack. It is also an important nut to crack for equity reasons: STEM careers continue to attract less females and pupils from ethnic minority backgrounds, not to mention fewer individuals from lower socio- economic groups.

The science capital teaching approach provides a means for teachers to make an impact on how pupils see themselves in relation to science. It involves a new and distinctive approach to teaching, but not one that will require teachers to spend hours planning or resourcing. With teachers already swamped with demanding workloads, and with school budgets dwindling, new initiatives that require more time and money simply will not work. We need to think differently, and this is why this is a change in ‘approach’ and not a new resource package.

I joined the science capital primary programme in September 2019 and already I am seeing a change in the pupils I teach. The change is subtle, but I hope long-lasting. As a busy head of department and class teacher, I have purposefully ensured that the changes I have made to my science teaching practice are those I know any busy teacher could do. However, this does require teachers to be really reflective and honest about their own mind sets in relation to pupils.

Reflecting on what counts

To begin with, we have to reflect on our own, often unconscious, categorisation of pupils being more or less ‘sciencey’, and broaden our understandings of what counts. This requires teachers to be aware of their own thought processes – to develop their own metacognitive awareness of themselves as educators.

The good news is that most teachers I know joined the profession in order to make a difference to pupils’ lives, especially for those who are less affluent and from backgrounds with the potential to be marginalised. Social justice is a big driver in education, and although we may debate the methodologies to improve it, I see the the desire to level the playing field all around me in my profession.

A plethora of research now shows that how we think about pupils influences what we and they expect of themselves, and a self-fulfilling prophecy so often unfolds. The science capital approach is centred around undoing our own and our pupils’ unspoken prophecies about themselves as science learners.

We expect affluent, articulate pupils to be better at science. And such pupils often do well because they are ‘schooled’ at home about how to participate within the narrow parameters of what is of valued in the education system. Our job is to legitimise a far wider set of experiences and skills that count as being ‘sciencey’, while at the same time, imparting the bodies of science knowledge and understanding pupils need to know.

More advantaged pupils often dominate science lessons, possessing accepted, and indeed often expected currencies in science, such as family members who are scientists, regular visits to museums and the partaking of a range of extra-curricular pursuits that lend themselves to learning more about ‘science.’ We see these children as ‘good at science,’and indeed they often lead in questioning exchanges, dominate group work and importantly, are seen by everyone in the class as more ‘sciencey,’ leaving the others feeling increasingly less so.

We might try to ‘feed’ more science to those who need it, provide more ‘sciencey’ experiences in school for them too, but this never seems to change how they see themselves against those who we all seem to know are more ‘sciencey’. In fact, the more we try to boost and engage, the more the gap seems to remain.

Yet the science capital teaching approach takes a different line altogether. We are not attempting to change pupils to fit into the world of science. After all, the problem is not their engagement with science, but science’s engagement with them! If science says where you live, who you know and what you do outside school are not ‘sciencey,’ why would you want to have anything much to do with it, even if it is engaging and interesting sometimes? It’s nice, but it’s not your type of thing, right?

Broadening what counts in practice

Our job, then, is to teach science content well, but at the same time to change the expectation and opportunities available to pupils, including whether or not their own experiences have value. This is where the focus on ‘personalising’ and ‘localising’ science topics through ‘broadening what counts’ makes a big difference.

For example, in knowing that some of my pupils enjoy dancing, why don’t I ask them to put together a dance to show how soil formation occurs? I teach it well, ensure the concepts are embedded, then let them use that to choreograph a routine. In doing so I have connected a big part of themselves to the topic. In knowing that one young lad’s parents run a building business, why not focus on the fact his father works with soil and return to this link frequently in class, thus validating this part of his life?

Worksheets having their place, and projects on planets and plants are all well and good, but find what counts for the pupil rather than leaving that to chance. Ask pupils to do homework exercises, think outside the box, link them to the everyday aspects of their lives like mobile phones, bath time, washing machines, the shoes on their feet, the materials in their bedroom.

In this way, teachers have to think differently, and the more we do, the easier it gets. The more we experiment with this reworking of what counts, the more that pupils will be inclined to see science as part of their lives. What we teach should never be ‘dumbed down,’ it doesn’t need to be, but the avenues through which we teach it needs purposeful widening. I can’t say that I’ve cracked the science capital teaching approach yet, but I’ve tried things that have worked well, and others that have crumbled into nothing. However, in understanding that I can make more in pupils’ lives count, I feel this approach will prove to be invaluable.

Beth Budden is a primary school teacher at John Ball Primary School and also a PSTT College fellow. As part of the Primary Science Capital Project, she is one of the ten teachers participating in the development of the primary science capital teaching approach.