Going under the coat of cats

Dean Veall here. Whether it’s our late openings, comedy cabaret Animal Showoff, improvised opera, audio cinemas or film nights our events programme aims to entertain, inspire and surprise audiences. Last Wednesday we worked with researchers from UCL and the Royal Veterinary College (RVC) to present an event that gave audiences a unique insight into cutting edge research on the evolution of cat anatomy and movement. In Wild Cats Uncovered we took members of the public behind the scenes into the dissection room to discover more about one of the natural world’s fastest predators. Wild Cats Uncovered was a partnership event between UCL’s Grant Museum of Zoology and the RVC which took place at the RVC’s Camden campus. During the event, leading experts in feline anatomy performed a post mortem on a cheetah before a live audience.

Informally known as ‘Team Cat’ and headed by Professors Anjali Goswami from University College London’s Department of Genetics, Evolution, and Environment and John Hutchinson from the Royal Veterinary College, researchers have brought together their expertise in evolution and biomechanics to better understand the evolution of form and movement within the cat family. Different species of cats from the family Felidae

For most animal groups, as they get bigger their posture changes: their legs tend to straighten and become stiffer to support their weight. But not cats. Despite ranging in size from 1kg to over 300kg, living members of the cat family are strikingly similar in their posture and how they stand or move. For scientists from Team Cat, this idea of the ‘crouching tiger’ is an evolutionary mystery they set out to investigate over the course of the project.

“We brought together a dream team of researchers with expertise across the fields of anatomy, development, mechanics, evolution and palaeontology to tackle big questions about big and small cats”.

The post-mortem on the cheetah, which had died of natural causes, revealed insights about the individual animal, and the cat family. In terms of the individual cheetah’s pathology, abnormalities in the gallbladder, spleen, liver and lungs and overall weight were consistent with the cheetah having died of a disease such as cancer.

“We shared a unique opportunity to celebrate the amazing form, function and evolution of cats in general, and the spectacular beauty of the cheetah specimen’s anatomy as well as its life and some clues about the sad story of its demise. We were flooded with challenging, insightful questions from the very enthusiastic audience and it was a joy to hear how much people attending appreciated the event. It was a very important event for us, considering our commitment to engaging the public with scientific research.”

In terms of the cat family, Team Cat has used a variety of techniques over the last three years to understand their anatomy; from tempting tigers to cross 3D scales that measure the force produced as they walk, to dissections of wild cats that died of natural causes in zoos and parks, to CT scanning and measuring the remains of fossil cats to capture their shape in 3D. Below you can see a leopard galloping across a force plate to gather data on the forces produced as they move.

Using these techniques, the scientists involved have been piecing together the developmental, ecological and biomechanical influences that have shaped the evolution of the cat musculoskeletal system.

“In evolutionary biology, we spend a lot of time trying to identify grand unifying processes or patterns that are repeated across different groups or different periods in Earth history, but the exceptions to these rules can sometimes tell us even more about how the current diversity of life evolved and why organisms look and behave the way they do. It shouldn’t come as any surprise to a cat lover that cats are one of the weird groups that break the rules, and we are looking at this from numerous angles, from development to biomechanics, and using a wide range of analytical techniques to understand how they get away with it.”

Check out our Flickr album below for more images. 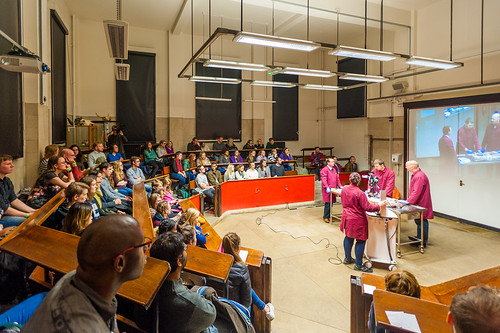 The “Walking the Cat Back” project is funded by the Leverhulme Trust.