Specimen of the Week 255: the cottonmouth head

Hello! Will Richard here blogging away to bring you another specimen of the week. And this one is an excellent example of the classic head in a jar. Timeless.

The cottonmouth (Agkistrodon piscivorus) is a venomous snake native to the southeastern United States. They can grow to nearly two metres long and are named for the white lining of their mouth which they display as a warning when threatened. Cottonmouths live in or near water and are excellent swimmers. They feed on a wide range of small mammals, birds, amphibians, reptiles and fish and have also been recorded eating each other. Their venom, which is produced in modified salivary glands, is potently cytotoxic and hemotoxic. As the snake strikes the muscles around the venom-sacs contract, forcing the venom down the hollow fangs and into the tissue of their victim. This causes the development of open wounds around the bitten area and widespread haemorrhaging.

Like all pit vipers cottonmouths have a pair of deep, pit-like openings in their face between their eyes and their nostrils. These pits lead to two sensitive organs which function much like ears but with a membrane that vibrates in response to infrared radiation rather than sound waves. This enables the vipers to “see heat”, sensing the size, health and location of their prey. Experiments have shown that pit vipers can accurately strike at objects that are just 0.2°C warmer than their surroundings.

As adults cottonmouths hunt on land and in water, locating prey before ambushing them with a quick bite. If their prey can be easily overpowered the snake will crush them using their powerful abdominal muscles but if not they will follow the wounded animal until their venom takes effect. The young snakes do things a little differently however. Newborns are more colourful than their slate-grey parents, with patterned bands and bright yellow tail tips. They hide and then flick their tails side to side to mimic the movement of earthworms. Small frogs, fish and other palatable prey are attracted by the allure of an apparently easy meal. It’s a costly error. 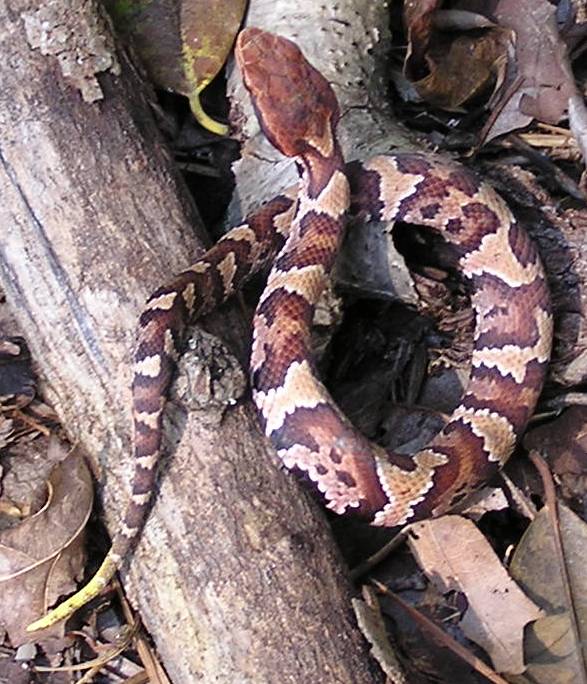 Juvenile cottonmouth. Image by Accipiter; in the Public Domain.

Snakebites are a serious problem in North America with around 45,000 recorded every year. About 7,000 people receive medical treatment and somewhere between 6 and 14 die. The majority of these fatal bites are caused by rattlesnakes (also pit vipers) however cottonmouths are occasionally responsible. The last example of this I could find at the time of writing was in May 2015. Cottonmouths share their watery habitat with a number of harmless water snakes and there are numerous field guides that offer guidance on how to distinguish between them. These rely on slight differences in behaviour, patterns and colours which I really would not trust myself to pick up on. So as a colour-blind ophidiophpbe, I think I’d just avoid them all…