Hello again all! This Friday I present to you the spectacular and highly misunderstood tailless whip scorpion as my Specimen of the Week. I hope not only to describe some of its most interesting features, but also to slightly alleviate the concerns of any aspiring rain forest explorers out there who may be of an arachnophobic disposition: this one’s harmless.

Members of the order Amblypygi, a relatively unstudied order of the arachnids, the tailless whip scorpion (also commonly referred to as the whip spider) has several unique features in its class. The name ‘amblypygid’ actually means ‘blunt rump’ in reference to its lack of a tail, which is found in the closely related whip scorpions. Whereas other arachnids possess eight walking legs, Amblypygi are unique in having only six. Instead of being used for locomotion, its elongated front legs serve as highly sophisticated sensory structures, adorned with thousands of sensory organs. These antenniform legs are sometimes called ‘whips’, and can be up to two and a half times the length of the animal’s other legs. They are used to sense the scorpion’s surroundings, which is especially important as it often occupies low light environments and all species are nocturnal. This serves as a perfect example of convergent evolution with insect antennae. A further distinguishing feature of the amblypygid is its spiny, raptorial pedipalps, which are used to capture prey in the same manner as a praying mantis or mantid shrimp, before mastication in its pincer-like chelicerae. The tailless whip scorpion also differs from both whip scorpions and spiders in being dorsoventrally flattened, allowing it to scurry into the narrowest crevices. It is found in tropical and subtropical regions worldwide.

Perhaps one of the most fascinating aspects of tailless whip scorpion behaviour is its reproduction. Courtship begins with a slow dance that may last up to several hours, before a spermatophore (a protein capsule full of spermatozoa) is deposited onto the ground by the male, which he slowly guides the lucky female towards. After fertilisation the female can lay up to 60 eggs, which remain in a ventral egg sac for three months before birth.  After birth, juvenile scorpions will cling to their mother’s abdomen for several days, until they moult and are sent on their merry way. Like the other members of its class, amblypygids will moult several times during their lifetime. 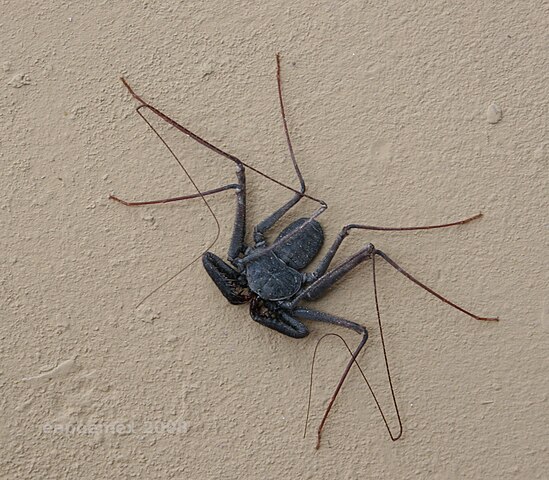 Whipping people into a frenzy

Unlike its true scorpion and spider counterparts respectively, the tailless whip scorpion does not possess either a sting or a venom gland, and its impressive pedipalps are only used to capture small prey, posing no threat to humans. Despite being harmless, it seems the tailless whip scorpion has always been feared. They are often considered to be highly dangerous by locals that live in close proximity to the areas they are found. The myth that the tailless whip scorpions are dangerous to humans appears to be alive and well today. Some will even recognise the tailless whip scorpion from the cinematic version of Harry Potter and the Goblet of Fire where a magically engorged specimen is used by ‘Mad-Eye’ Moody to demonstrate the three unforgivable curses, after he describes the animal as ‘lethal’. Perhaps their armoured, eight legged morphology will always be feared by the human psyche.

George Phillips is Museum Assistant at the Grant Museum of Zoology.