Understanding Catfish Colonisation and Diversification in The Great African Lakes

Why some regions or habitats contain vast, diverse communities of species, whilst others contain only relatively few species, continues to be the subject of scientific research attempting to understand the processes and conditions that allow and adaptive radiation. The Great African Lakes exist as freshwater ‘islands’, with spectacularly high levels of biodiversity and endemism. They are particularly famous for the hyperdiverse Cichlid fish, but they are also home to diverse assemblages of many other fish, such as catfish. Recent research in GEE investigated the evolution of Clatoteine catfish in Lake Tanganyika, to investigate the forces driving evolutionary radiations in the Great African Lakes. Their results suggest that evolutionary time is of key importance to catfish radiations, with recently colonised groups showing less diversity than long-standing species.

Lake Tangayika is the World’s second largest freshwater lake, covering 4 countries in the African Rift Valley (Tanzania, the Democratic Republic of the Congo, Burundi and Zambia). It is home to the highest diversity of lake-dwelling catfish on Earth, however the evolutionary history of these catfish is not fully understood. GEE academic Dr Julia Day and PhD Student Claire Peart, in collaboration with colleagues at the Natural History Museum, London and the South African Institute for Aquatic Biodiversity, investigated the evolutionary history of nocturnal Claroteine catfishes in Lake Tangayika. This group of catfish offers an excellent opportunity to investigate the influence of different factors in evolutionary diversification, as it includes multiple genera with varying range sizes and habitat types.

The Drivers of Diversification

Previous research has suggested a number of factors that are important in enabling adaptive radiations that can produce extremely high levels of biodiversity – deep lakes that experience lots of sunlight tend to favour evolutionary diversification. Diversification is also more common for species that have had a lot of evolutionary time in which to diverge and that experience high levels of sexual selection. Interestingly, although lake depth is important, the total size of the lake does not appear to be so important for diversification. A large geographical area to diversify into may influence the duration of adaptive radiations, however, with river-dwelling species showing more consistent species-production through time. This data suggests that adaptive radiations may be, to some extent, predictable, however much previous work has focussed on key model groups such as the Cichlid fish, and these hypotheses need to be generalised to other species and locations. 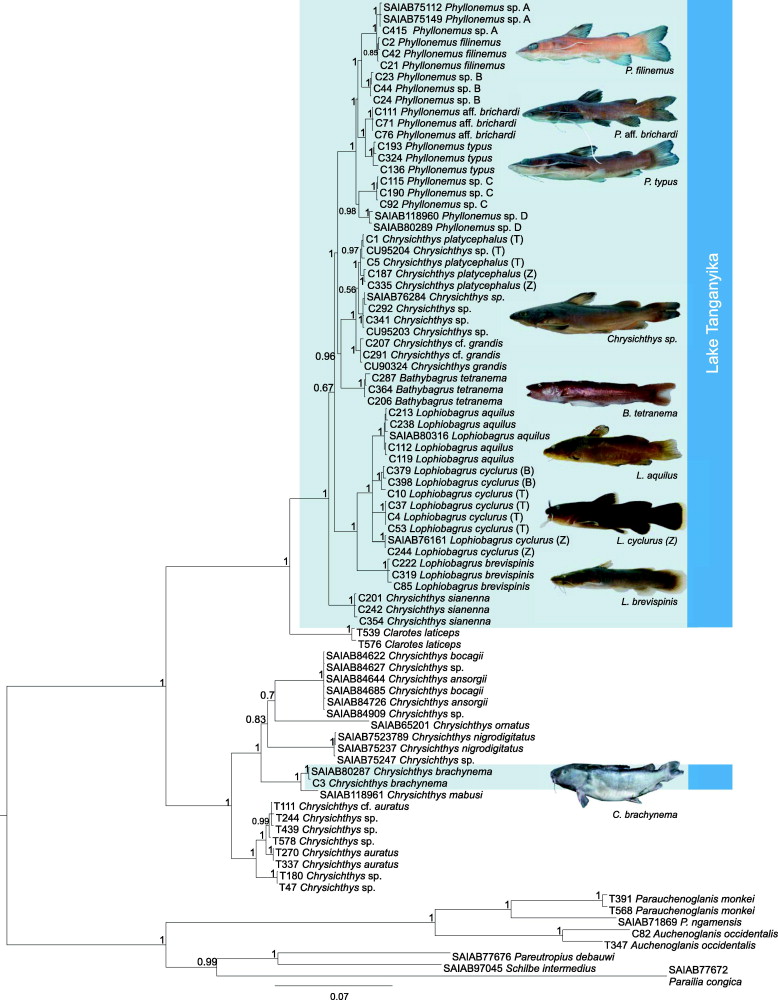 The authors sequenced nuclear and mitochondrial genes from 85 catfish covering 10 of the 15 species of Claroteine catfish, in order to construct an evolutionary tree for the sub-family. Estimates of the relationships between species and the evolutionary timescales of colonisation and divergence allowed the authors to distinguish between the possibilities of single or multiple colonisation events, and the processes driving diversification. The results indicated that most Claroteine catfish in Lake Tangayika originate from a single colonisation of the lake between 5 and 10 million years ago, followed by evolutionary radiations to produce the variety of species present today. One species, Chrysichthys brachynema was the exception to this rule, having independently colonised the lake around 1 – 2 million years ago. This species has not shown adaptive radiation since colonisation, probably because of the relatively short time it has been present in the lake. These results support previous work that has suggested that time is an important factor in producing highly diverse species assemblages.

This research was made possible by funding from the Natural Environment Research Council (NERC), the National Council for Scientific and Technological Development (CNPQ), the National Geographic Society, and the Percy Sladen Memorial Trust Fund.

The tree of life is a vast tangle of branches and twigs representing around 9 million species. Understanding the patterns and processes by which these species originated is a fundamental topic in evolutionary biology. Previous studies have suggested that the generation of new species may not be uniform over time, often with an initial burst of speciation, slowing as the lineage expands to fill the available niches. However, recent research in the department of GEE suggests this may not always be the case, and a previous focus on island species may have skewed our perspective of species accumulation.

When a new lineage begins to diverge, adapting to exploit new habitats or lifestyles, this often leads to an adaptive radiation, with many new species appearing over a short space of time. This initial rush of new species eventually begins to slow, as all the available niches become saturated, and slowly speciation grinds to a halt. This is the traditional view of how lineages have diversified to produce the vast array of species we see today (as well as many who have long since gone extinct). However, much of the research in this area has focussed on species confined to islands and lakes, where different processes may influence the appearance of new species. Continental species have a larger area to expand into, and a wider array of climatic conditions to cope with, providing a different set of parameters which may influence speciation. Recent research in the department of Genetics, Evolution and Environment suggests the pattern of species generation in continental lineages may differ from that of islands. In their recent paper in Systematic Biology, Day and colleagues determined species relationships for 81 species of squeaker catfish from Africa in order to investigate the patterns of species generation and diversification during their 35 million year evolution. Using genetic data along with fossil evidence, they constructed a squeaker catfish tree and estimated divergence dates and historical geographic distributions. This tree revealed an almost constant rate of species generation over time. Across 35 million years of evolution, through major climatic and environmental changes, the squeaker catfish have been churning out new species at approximately 1 every 8 million years, and look set to keep going for another 90 million years, or so. So why don’t the continental, river-dwelling catfish follow the same rules developed through years of studying island and lake-dwelling species? Continents are, of course, generally much larger than islands, and rivers provide more opportunity for movement than lakes. Continents allow for more constant species generation, as there is more space and habitat diversity available for species to move into and exploit. The climatic changes in Africa over the last 30 million years may have also helped the catfish maintain constant production of new species – creating a variable environment which is much less likely to become saturated with species. The squeaker catfish have survived through major tectonic activity in the East African Rift valley, including volcanoes and earthquakes, as well as huge climatic changes that influenced sea level and temperature. By combining phylogenetic and biogeographical data, Day et al suggest these environmental variations may have played an important role in African catfish diversification.