Like so many things in 2020, #LearnHack, our UCL community hackathon, also went virtual for the first time this year. Instead of running over an intense weekend, we stretched our usual structure across an entire week to accommodate people’s schedules, participants in different time zones and potential tech problems. As usual, the event attracted participants from across the institution (some statistics here). Unusually, we had more staff participants on this round than ever before. Even more unusually for #LearnHack, a lot of the staff came from Professional Services.

In a year of distance, a motto of “Building Bridges” for #LearnHack 6.0 seemed appropriate. We had three broad themes:

A total of nine project proposals were submitted across all three themes. Not all projects managed to attract enough interest to form a team. Although a number of projects didn’t make it over the project submission line, the topics nonetheless generated conversations and connections that might not have taken place without the event. As always we hope that these connections, conversations and projects will continue in some form long beyond this edition of #LearnHack.

Projects that made the submission deadline

Coffee Roulette and Virtual Quad combined forces as there was significant overlap in aims and sharing skills and resources made more sense than having two individual much smaller teams. Virtual Quad/Coffee Roulette spent a morning working in Miro, pulling together research, a long list of desirable features and potential solutions. Next, we managed to get a survey out to sanity check our idea of what such an environment should look like. The survey received 43 responses in total and revealed that we were largely on the right track with our ideas (details here).

The overall project was far too ambitious to come up with any actual product in the very short time we had, however, the conversation about virtual social spaces is ongoing and we’re happy to talk to anyone who’d like to know more or get involved. 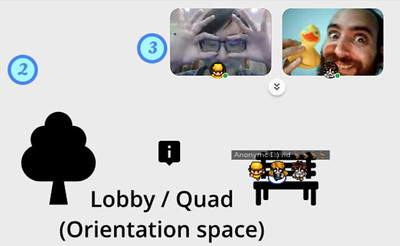 Here are some #LearnHack reflections from Kitty:

Why did you join?

I’d been wanting to participate in a hackathon for a while, and LearnHack’s emphasis on inclusivity and being open to people from all backgrounds with any skill set (not just those technically-minded), to both staff and students, really appealed to me. I also liked the sound of the themes and projects that had been proposed, and that it was UCL-based – I’d be able to see any positive change we might make as a result of the hack right here, in this very community.

What was your team/project?

My team was the Games Workshop team, which aimed to use a games format to address some of the common issues we’d all faced this challenging year, when we’ve had to transition large parts of our life online. Issues like what it feels like to be a faceless name joining a lecture full of other faceless names; not knowing whether it’s better to turn your camera on/off; whether to contribute via the chat; how to make friends when there are no face-to-face social opportunities. Of course, we couldn’t solve these complex problems over one week – but what we did do was create a game that presented optimistic online futures and modelled scenarios in this strange new online world, which we hoped would help players feel less alone and more empathetic towards each other.

How did you find the week?

To be honest, the start of the week was a bit awkward as it was my first time joining a hack and I had no idea what I was doing or what was meant to be happening. But once I met my team and we started drafting ideas and talking about our project, time just flew by. My teammates and I met every day to discuss our progress and work on our game.

It was really fun, not least because we got to play games (for research purposes, of course!). By the end of the week, my team had a small but functional game that we hope to be able to develop further next year. I’ve also personally learned a lot, and not just about games. I’ve learned about practical problem-solving, been reminded of how useful it can be to work through ideas with others, and learned how to use a bunch of new software tools that I’d never heard of before, which I have since continued to explore and use. I may even work on something related for my final year Master’s project.

If I had anything to say to anyone thinking about joining a future LearnHack, it would be: why not? It’s a great way to do something out of the ordinary.

Thanks to everyone who took part in this year’s event. Special thanks to Paul Bailey from Jisc for being our independent project judge.